I was granted with a pretty awesome farm a little under three years ago when I asked to pheasant hunt the property. First time we walked I saw a pretty nice buck so I asked the landowner if she allowed people to hunt deer and she had said no one ever asked so of course I jumped on the asking train. She gave me permission and I have been blessed ever since. Full freezer of venison and pheasant. Little did I know this property would start something I believed was impossible in the county. Fast forward to last fall I harvested my second buck off the property on Oct 12 and I decided I would hang a camera for the fun of it since I was trapping out there anyways. The first pull shocked me with a stud 3.5 year old. 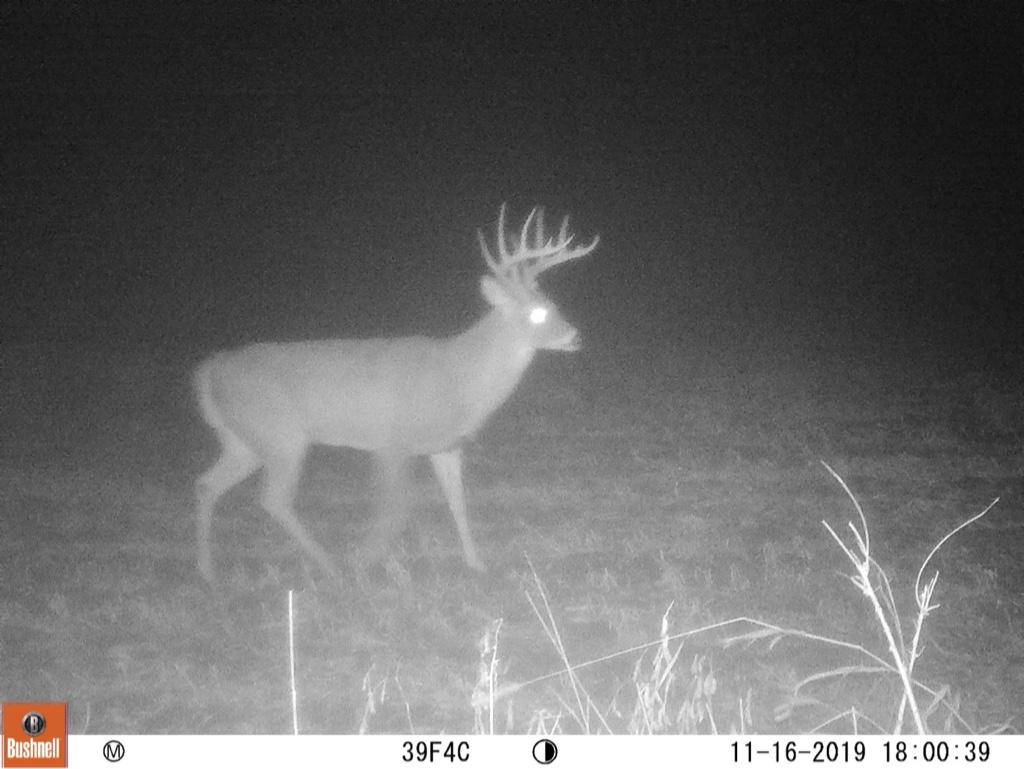 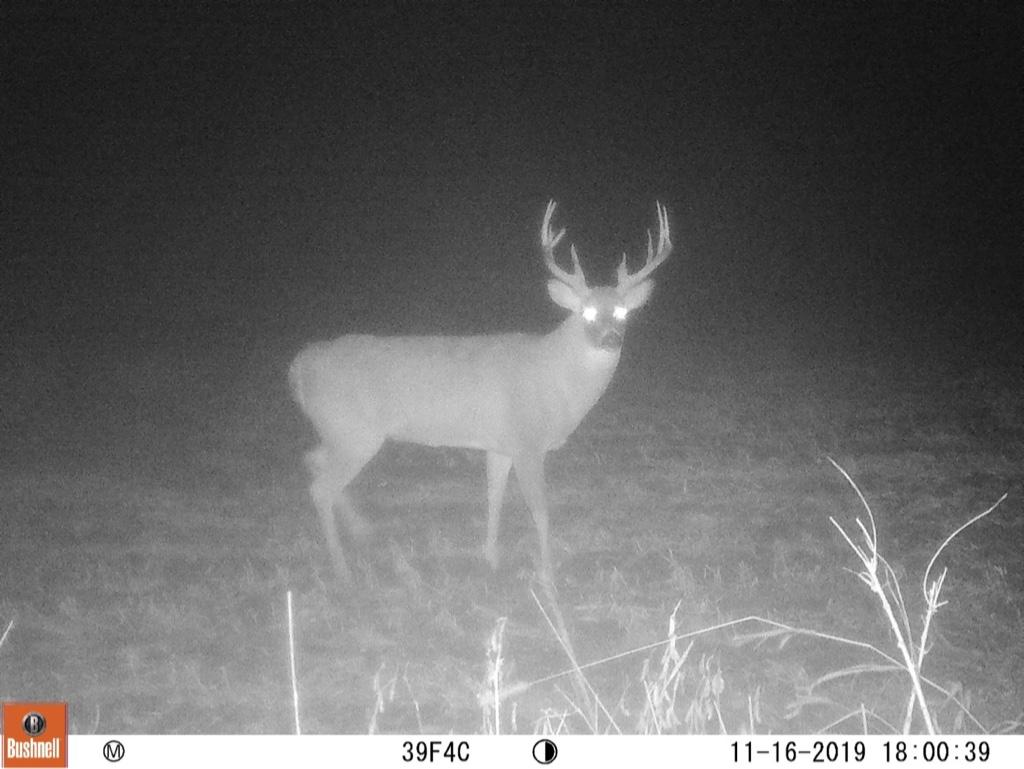 I was excited to see this and I had actually began to see him when I’d walk to check traps. He was around a lot and during shotgun season he had moved 2 miles north of where I had been seeing him regularly. I figured he’d probably get shot during 2nd season or LM like most deer do here and I kind of wrote him off as we rarely ever get repeat deer (4 in 10years)
So this year with the property being small and hard to hunt I usually don’t like running cameras but Tactacam came out with the cheap cell cams so I bit and hung them out. And to my surprise ole Tim Allen showed up on Sept 6th 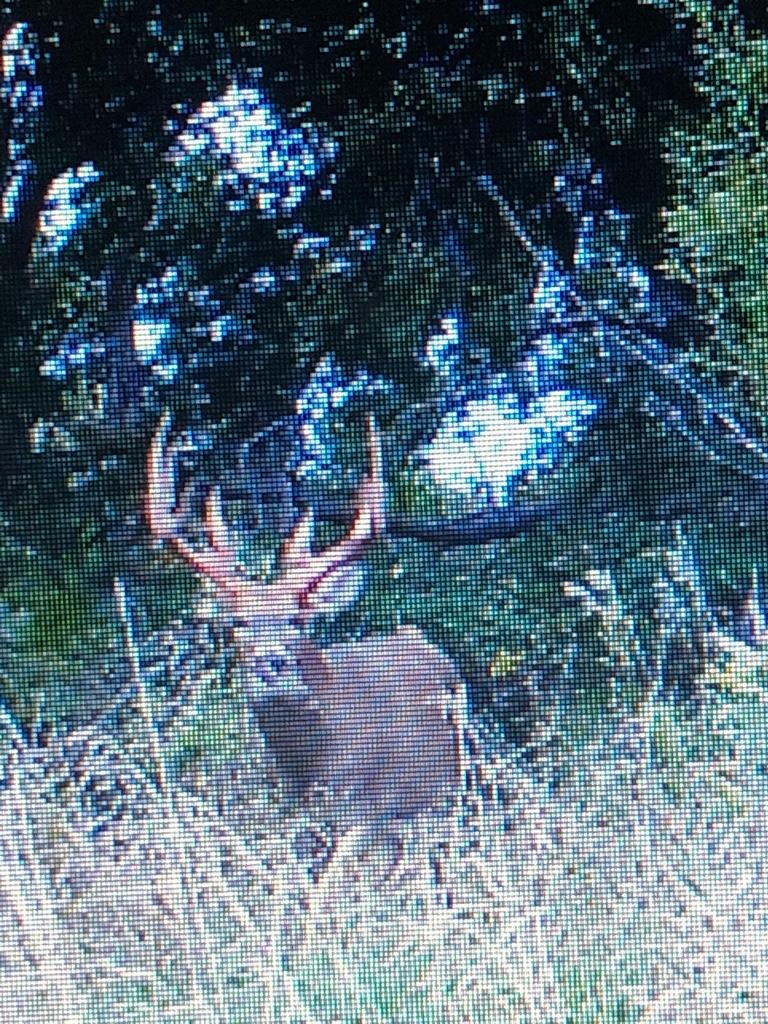 At the time I had no clue because my first camera was defective and never sent pics (Tactacam CS for the win) so when I pulled the card I was shocked.
He then showed back up a couple time and disappeared after the 20th of Sept. I was sick thinking maybe he died or shot by a youth hunter so my season was on reset mode. But on Oct 14th he showed back up on camera and I felt pretty confident he was back to stay. 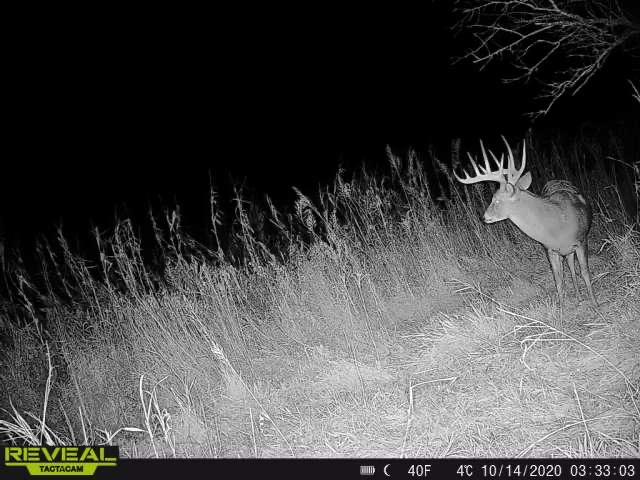 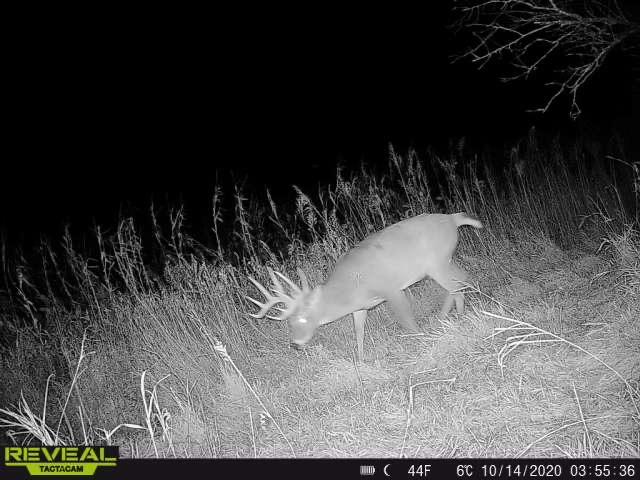 So here I am eyeing the cold front about to hit the next day and thinking here’s my chance. Then my phone starts blowing up with picture notifications so I open the app to this picture: 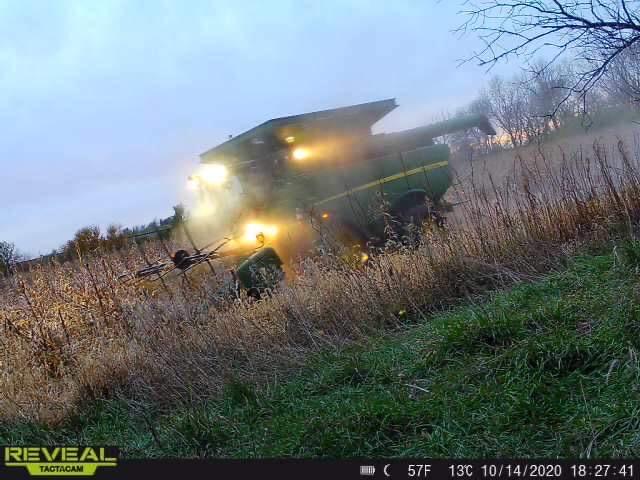 I couldn’t believe the timing. Buck shows back up that morning and the field starts coming out. So the next day I leave work grab a stand and sticks and hang and hunt a set where I know I’m playing it safe but can observe I figured with the combine having about 4 passes left I’d be golden. Well the farmer had a tractor and wagon parked about 100 yards to the south of me in the middle of the corn I didn’t think much of it until it kept getting later and later. I look up to see my #1 come to the edge of the field look at the tractor raise his tail and walk the other way. But about 15 minutes go by and we are getting into that 30 minutes before dark and does start piling into the corn and all of a sudden the field busts out as the farmer comes in his pick up to move the tractor. I thought no problem I got 30 min they’ll be back, they had other plans. Not another deer. So I decide to hunt the 16th with the cold front and it was pretty uneventful. So with Saturday being warm I elected to spend the day with the wife with the plan of hunting Sunday with the next temp drop. So Sunday night I get in the stand around 3:30 and get ready and not even 10 min I look up and here comes a 3 year old 8 down the middle of this timber point hopping over the derecho damage and he walks under my stand straight down wind of me little did I know when I turn back around to look where he came from there was another slammer 3 year old at 3 yards rubbing on some honey suckle 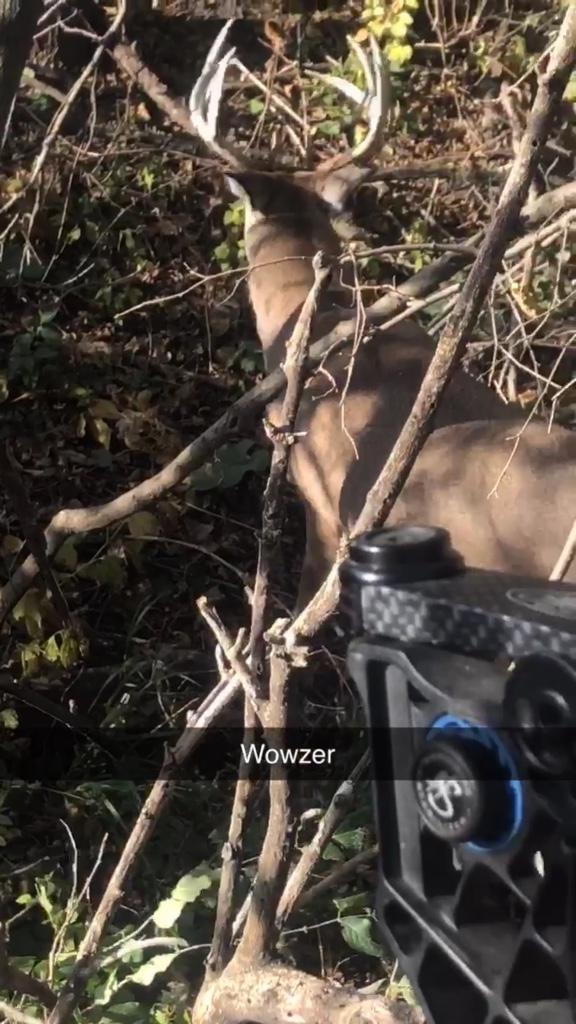 I let them walk off and I kept tabs on them as the crossed the cornfield and into the CRP because I had the feeling Tim was in the CRP bedded and these rascals would go to his area. Time ticks by and I see a few more does to the north, and I’m watching these guys meander further to the SW and I’m watching in the binos and notice there’s a new buck with them 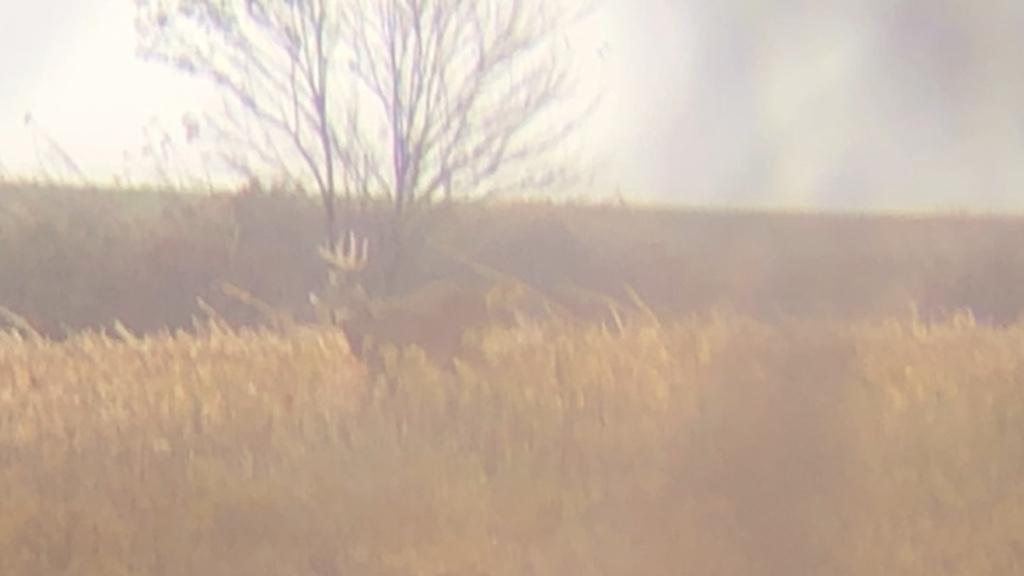 It looked to be a really nice 4 year old 9pt that I’d of been tickled to wrap my tag around. They bump a few does around and start going further west about 550 yards to the SW of me now and they make a sharp turn and head back north then I see Tim 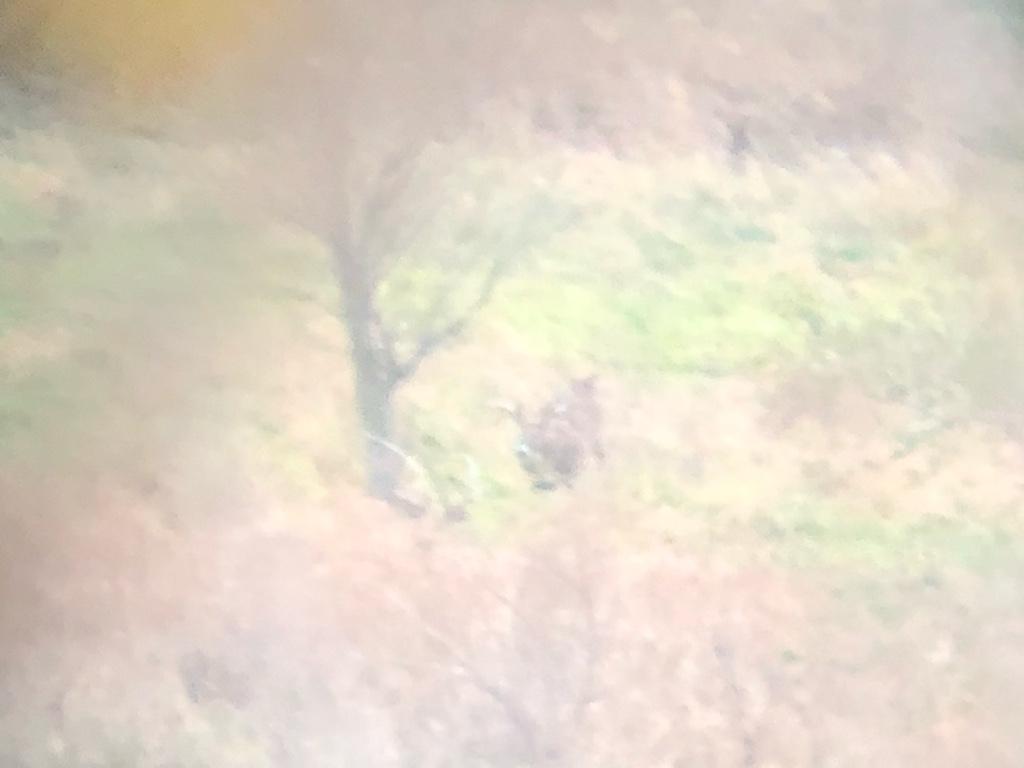 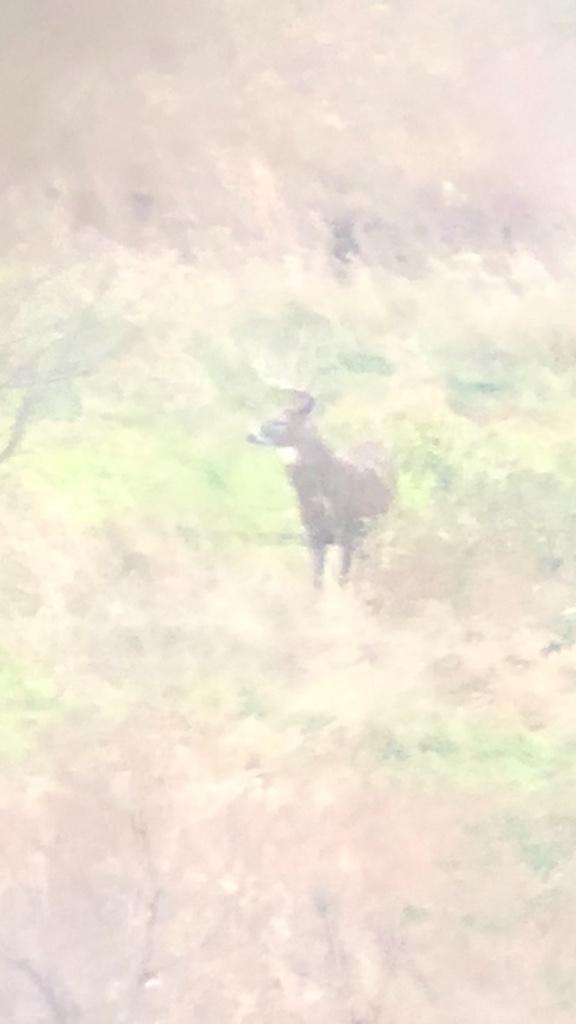 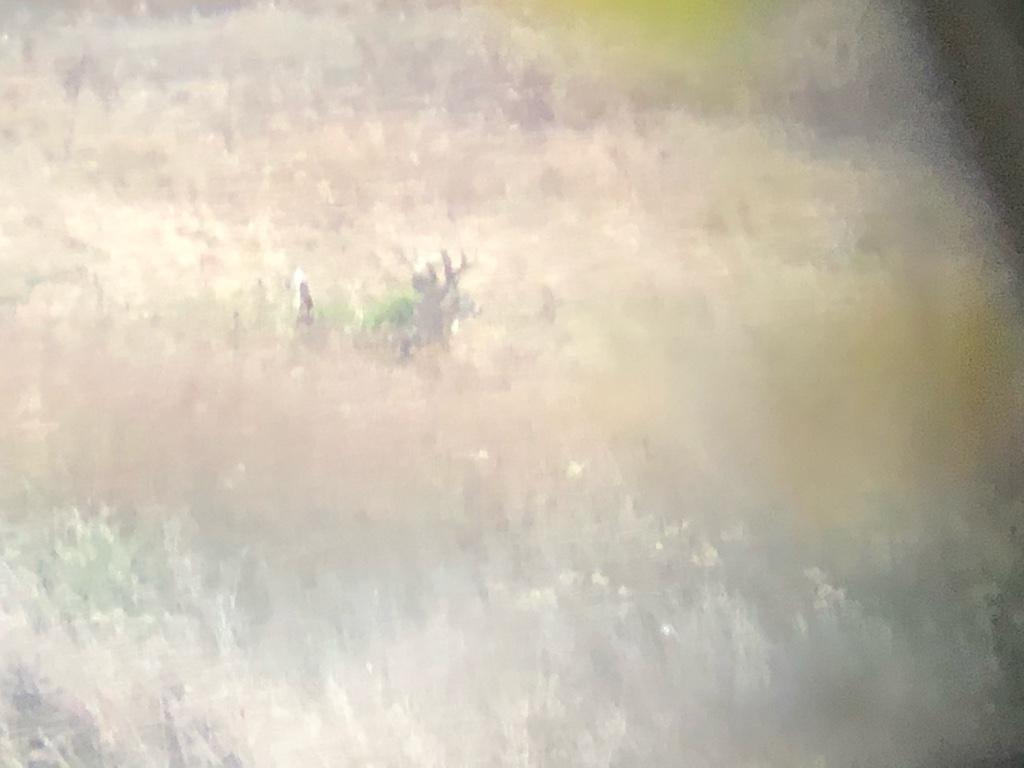 So here they are 500+ yards away messing around and it’s 6:00pm and I’m like there’s no way he’s going to make it to me before the end of the night hence all the bino pic taking. Well I see all the deer start filing back north along the creek in the CRP and here he comes with them 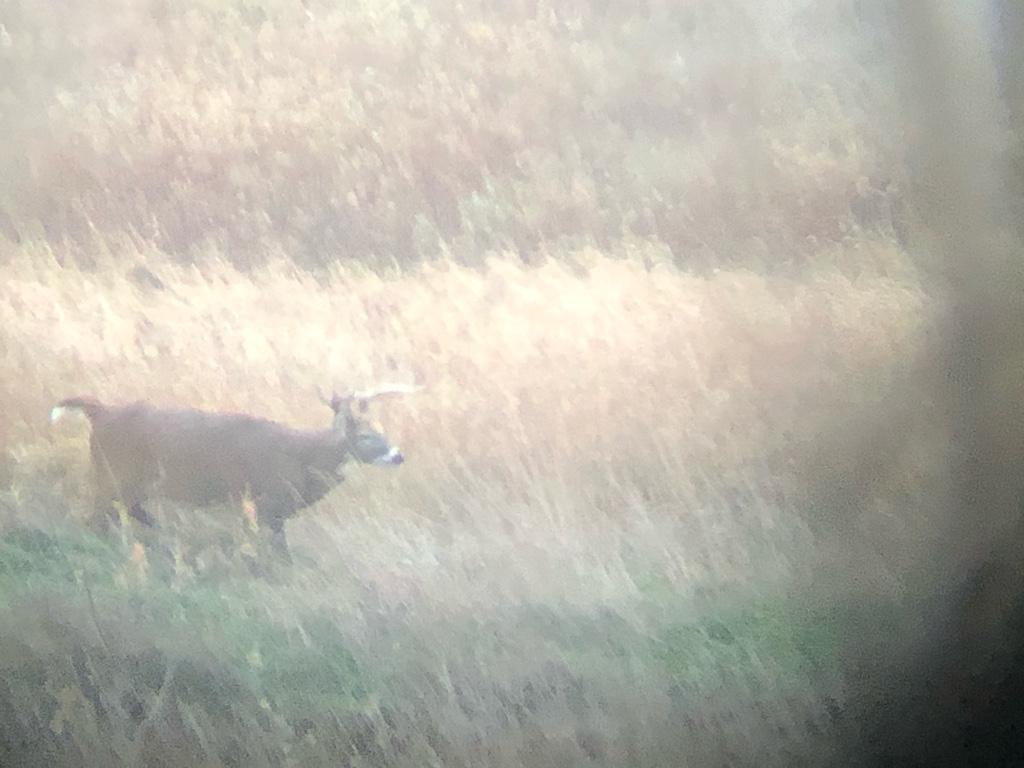 He comes to 110 yards and works a scrape then starts trotting to the south again. So I look back and here comes that dandy 3.5 year old and he doesn’t like him. I snort wheeze and he stops on a dime and just stares in my direction and it seemed like forever but then he disappeared in the creek and pops back out chasing the buck from the south back to the north at this point two fawns had popped out of the creek 80 yards from me in the corn and he decided to go NW away from me and the 3.5 year old joins the fawns. Tim didn’t like that or maybe he was feeling himself because he jumped around throwing his head like a horse feeling his oats and came trotting across the creek into the field to 72 yards. I’m checking the time and ranging him. I have 12 minutes of shooting time left and I’m thinking there’s no way. Then the fawns work towards me more and more until they are down wind of me licking my cell camera at 10 yards. It’s now 6:53 I have 3 min to get it done he’s now at 40.....30..... fawns still down wind and I’m praying they don’t blow. I’m checking my time and I have two minutes and he steps into my shooting lane at 20 yards so I draw back settle my pin on him and let the arrow fly. But I didn’t like the sound at all. He trotted off to the south staring back at me and I think I missed him. Then he begins to walk slowly so I think otherwise. I wait for him to disappear and I get down grab my arrow and think liver right away so I back out of there immediately and didn’t plan on coming back til the morning. Long sleepless night with good words from Skip and Rob had me trying to stay positive.
Went back this morning with my buddy and his wife to track him and we lost blood after 20 yards but I had an idea where he was going. So I followed the creek to where I thought he’d be and I could hear splashing well then I could see a rack so I take off sprinting with my bow and put an arrow in him. But was oblivious to the coyotes that I just about stepped on. My buddy said as I was running they could see the coyotes jumping in the creek grabbing the deer. He expired quickly after another arrow. My thoughts were correct at the arrow with mostly liver and guts as he was quartering more than I had thought. I couldn’t be happier with this deer. I just wish I could have done my part better at the shot. 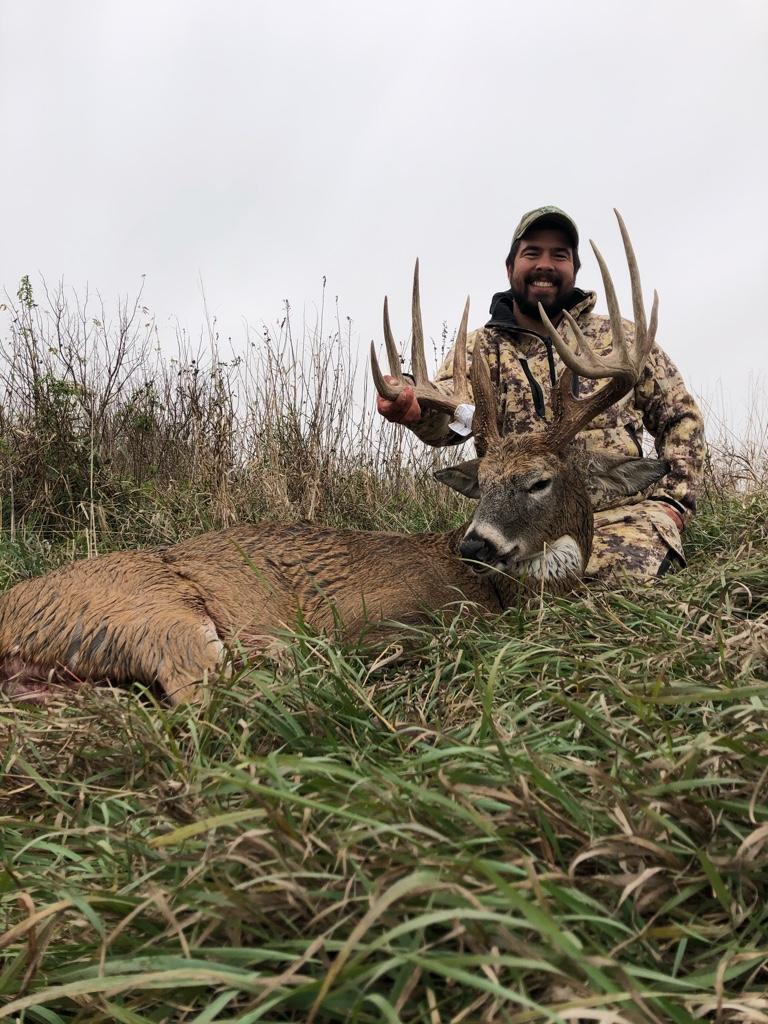 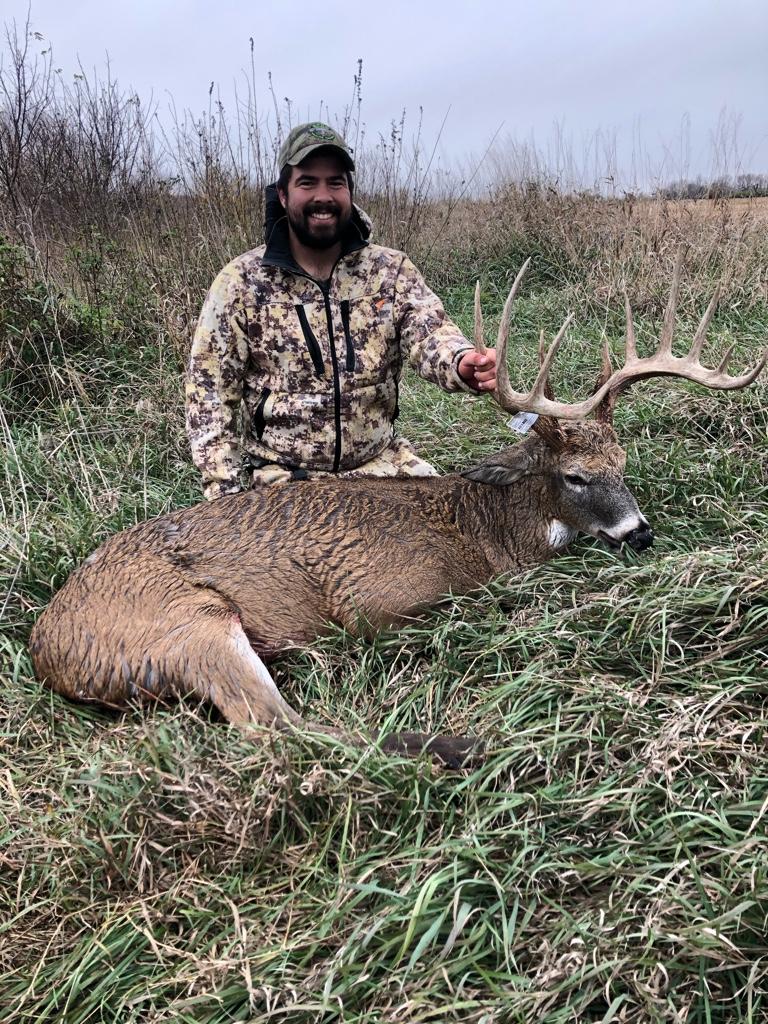 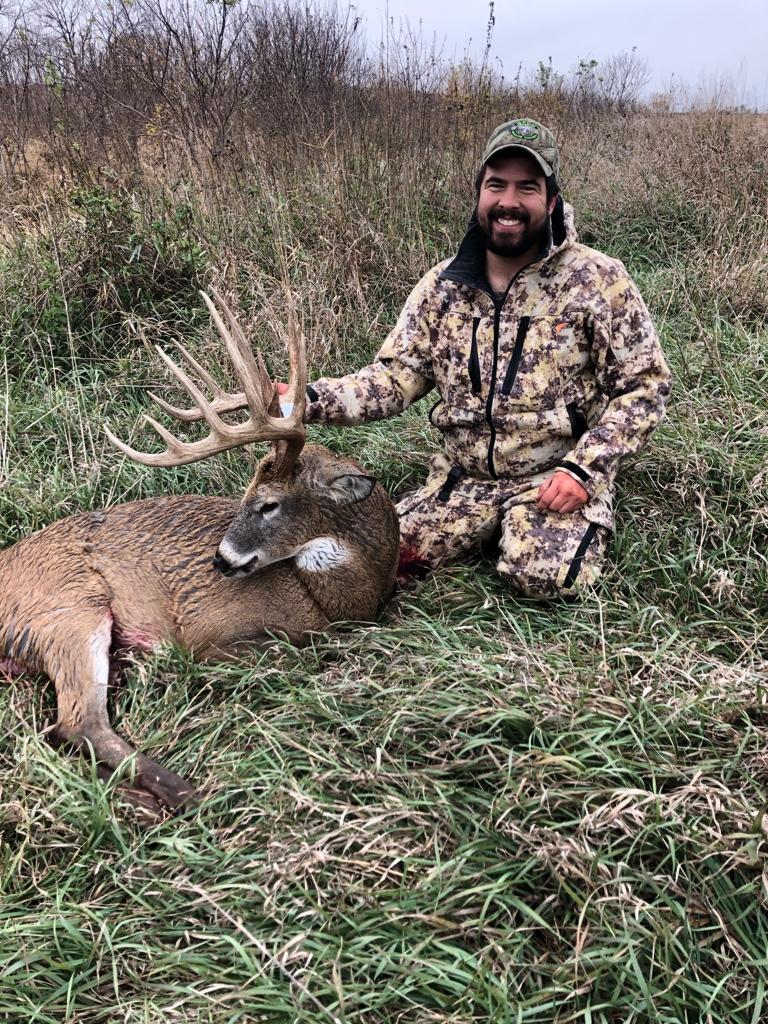 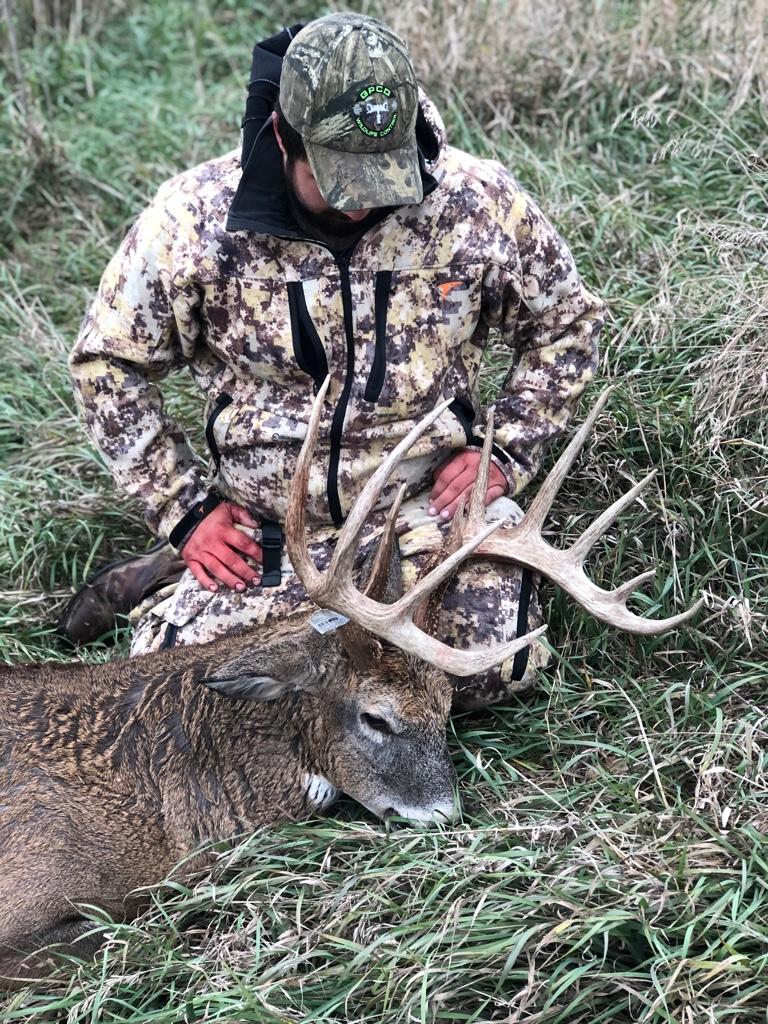 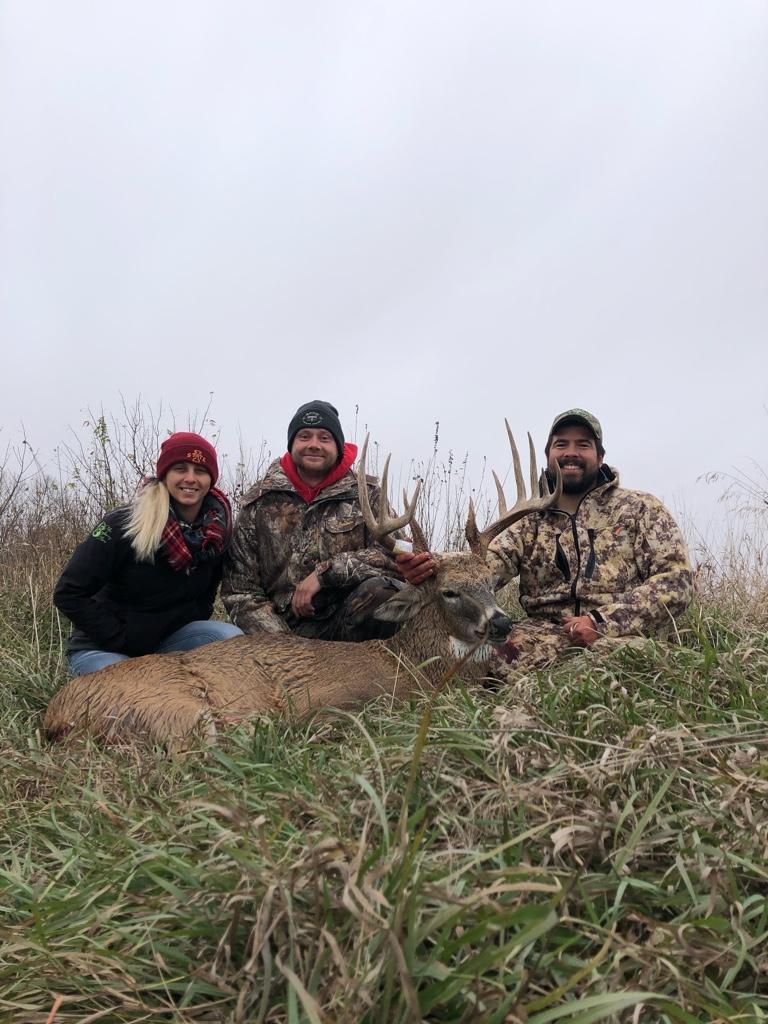 This may be the largest deer I ever harvest and my person best by 19”. He ended up scoring 176” Tim Allen is going to be making the home look that much better.
Last edited: Oct 29, 2020

Awesome whitetail and great story to go along with it!!!!

Sent from my Pixel 2 using Tapatalk

Congrats on a giant. Great story to go with it. Thanks for sharing it with us.

Great buck and wonderful story. I really enjoyed reading it. I could picture it all in my head.

Staff member
Well deserved!!!! Growing as a hunter and the size of the bucks. Well done, worked hard & smart for that dude, congrats!!!
D

Wow that is a real stud. Congrats